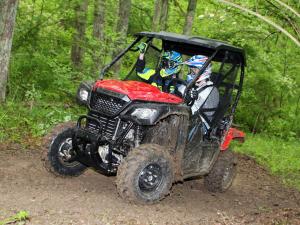 Less than a year ago at the introduction of their innovative Pioneer 700 and 700-4 Side x Side, Honda promised they were on the gas and there would be several more models to come.  For a company that protects their secrets as if they are grandmothers jewels it was a stunning statement that definitely grabbed our attention.  Today Honda delivered on the first part of that promise with the release of a second new Side x Side, the 2015 Pioneer 500, and it’s every bit as unique as the first.

Honda Finds Its Focus with Two Rookies
Written By:
Staff

Every brand has a loyal following, much like sports teams.  Even the hard luck Chicago Cubs, who haven’t won a World Series in more than a century, enjoy a rabid fan base.  Despite supposed curses from goats and other unlikely prospects, they gleefully root for their team as if they were on a rollercoaster at Mardi-Gras, all the while hoping their famous circle-C logo will adorn the top of a World Series Ring. 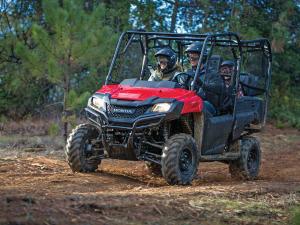 “We’re in with both feet, and we’re in it to stay.”  Honda’s Bill Savino left no doubt about the company’s position at a meeting before the official start of production of their new four-seat Side x Side, the Pioneer 700-4.  Not only did Honda open up about the innovative 700-4, but they were quick to share inside information about the recently announced two-seat version of the Pioneer 700 as well.  For a company that usually guards secrets like it was their grandmother’s jewels it was an unusually candid conversation.

A first Look at the New Honda
Written By:
John Arens

The details are still a little sketchy but one thing is clear; Honda intends to take a big swipe at Polaris, Arctic Cat, Can-Am, and Kawasaki with the newest and most advanced Side x Side they’ve ever built, the all-new Pioneer 700-4.  The new Pioneer is meant for more than life on the prairie, and one look shows that Honda is serious about Side x Sides.  It’s been a long time coming, but the Pioneer 700-4 looks to break new ground for Honda and make tracks where they’ve never been before.

Torrance, CA: With this press release, American Honda completes its lineup of 2013 models and begins a series of announcements that will give riders a look at some of the exciting new Honda models coming for 2014. The 2014 model year promises to be every bit as exciting as the 2013 season, as Honda continues to work at expanding the market through the introduction of innovative concepts in motorcycles, ATVs and Side-by-Sides.“Today we’re announcing the release of the final model for 2013, but we are really excited to give everyone an early look at some incredible new machines for 2014,” said Powersports Press Manager Bill Savino. “We introduced a number of terrific new bikes in 2013, and now we’re carrying that momentum forward with even more innovative models that cast a fresh take on riding. These new models are not only exciting in concept, attention-grabbing in looks and fun to ride, but they will bring great value for the money.